Time flies! It's already been three weeks since Jason officially entered our lives. Even with the sleep deprivation and carpal tunnel, these three weeks have been amazing. I never imagined that being a mother would be like this...completely, utterly, all consuming love.

Sometimes, when I'm alone with him at home, I think back to all that we went through to have him in our lives and I'm speechless. Tears start welling up in my eyes and I feel so incredibly grateful and happy; I'm turned into a blubbering fool and all I can do is hope that everyone that is struggling to conceive gets to feel what I feel. It's a blessing that I can't even begin to describe.

With that being said, I have learned a few things during these three weeks and I'll pass on my experiences:
Lastly, I just want to say how happy I am for both Newbie and TurtleMama!!
Posted by Sooz at 5:25 PM 5 comments

Finally! I think we may have gotten to a point where Jason is actually sleeping 3-4 hours between night feedings. With 30 mins for feeding, 15 mins for burping and changing, and then another 15 mins to get him back to sleep, our 2-hour feedings were leaving me with just 1 hour to sleep before having to get up for another cycle.

Overall, he's a great little baby and not too fussy. He loves to eat and makes the cutest little noises at night...grunting, gurgling, snorting and farting. I couldn't have asked for a better baby. This little guy has stolen our hearts. We can't even imagine what life was like without him.

Me, on the other hand, well, I'm definitely much more emotional. I cry at everything. I've never cried so much in my life. Whether it's something sad or something happy, I'll burst into tears at a moments notice and it's driving me crazy! It's like I have a split personality...Half my brain (the rationale half) is telling me to stop crying, and the other half is so emotional that I can't stop myself from crying. I'm hoping that this emotional roller coaster will calm down once I get some more sleep and once the hormones start evening out. It's been difficult because it's hard to explain to my mom and Doc why I'm crying when really, there's no particular reason and once I start, it takes me awhile for me to stop and next thing you know, I'm crying, Jason's crying and Doc just looks confused and helpless.

Even with all the hormones, emotions, and sleep deprivation, I wouldn't trade this for anything. This little guy is my pride and joy. I'll leave you with some pics that my brother-in-law took for us at 10 days. 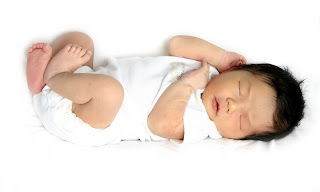 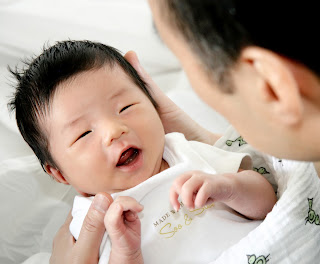 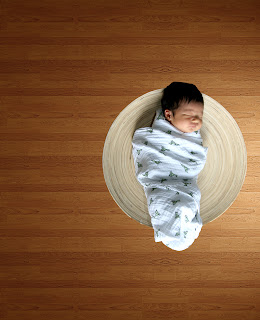 Before I start the second part of Jason's (yep, little J) birth story, I have to put in two cents about my first Mother's Day. I really didn't know what to expect. I had dreamed about this for so long, becoming a mother and not just watching from the sidelines wondering when (or even if) it would be my turn. I feel so incredibly grateful, fortunate, happy and content. Even as I write this, I'm tearing up with emotion. I've been so blessed to have this little crying, pooping, sleeping miracle enter my life...the best Mother's Day gift ever.

Ah, so, now, where was I...Oh, yeah, the contractions! At 4 am, the doctor came in to check my progress and announced that I was 4 cm dilated. Hooray -- progress! At that point, my contractions were incredibly painful and coming 1-2 minutes apart, so I gave in and decided to take the epidural. They moved me from the "laboring" room to the "delivery" room and called the anesthesiologist, who luckily was able to come fairly quickly.

The epidural was a godsend, but unfortunately, I wasn't progressing and it took me another 12 hours to dilate to 10 cm.  During the wait, I developed a fever of 101.4 (I swear it was because I had had no food or water for over 24 hours) and so they started me on antibiotics. So, at this point I had the epidural, penicillin (since I was Group B Strep positive), antibiotics and the saline IV being pumped into my body.

In the meantime, I was also dealing with the most incompetent nurse ever, who ended up burning me with hot compress. When she had changed the penicillin bag, she forgot(?) to dilute the medication and when it went in, it felt like my entire hand and arm was on fire. So, in her pathetic attempt to alleviate the pain, she put a hot compress on my hand which left a big red burn. One of the other nurses noticed the burn and thought it was an allergic reaction to the IV and they spent 10 minutes debating whether or not to move the IV to my other hand. I nearly flipped my lid and told them that they could NOT move the IV. At some point during the argument, they agreed that it probably was not in my best interest to move the IV.

So, here I am at 4pm and they decide that I'm ready to push although I'm not fully 10 cm AND the baby is still at +1 (hasn't completely dropped). After one hour of pushing, the delivery team tells me that if I don't start making more progress, they may have to resort to a c-section. Not something you want to tell a woman after 29 hours of labor...If I wasn't so deliriously tired, I think I would've said some not so choice words. However, at this point, some very wise individual (can't remember who) decided that I needed to lower my epidural and they halved it. Once that happened, I could actually feel exactly where to push (I know this may sound odd, but it's sort of like a poop that's stuck), so after another 2 hours of pushing, our baby boy, Jason was brought into this world with a very loud cry!

Battle wounds included: one small hemorrhoid, one small tear, and a burn from a hot compress. Overall, the battle was well worth it and I can honestly say that I'd do it all over again! 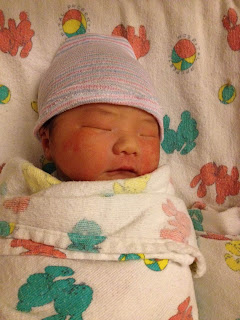 Where do I even start?! I guess I'll start from the very beginning which was the morning of Wednesday, May 3rd...

I had a routine appointment scheduled with my OB to check on my status since I was one week past my due date. When I went in, she did the requisite check for the heartbeat and fundal measurement, and then she went on to tell me that she had scheduled an induction for me on Friday, May 5th if I did not go into labor in the next couple of days. I had actually thought the induction would be scheduled for the following week, closer to week 42, but my OB felt that it would be better to induce before the weekend (sounds good to me).

So, based on her rec, I agreed to the appointment and was mentally preparing for a weekend delivery, UNTIL she checked my cervix and saw blood...more than what she believed should be seen if I had bloody show (which is what I thought it was). My OB recommended that I go to the hospital L&D and have them monitor and get a second opinion. Her thought was that I'd be sent in home before lunch, which was what I was anticipating.

With my OB referral and debating what I should have for lunch, I waddled to the hospital L&D unit and was hooked up for a non-stress test which showed that the baby was doing fine and I was having zero contractions. Visions of burritos and chips/salsa were on mind (yum...lunch), until the doctor was finished with his check and he told that he, too, was concerned with the blood. There was a possibility it could be a placental abruption and that since I was going to be induced on Friday anyway, it would be better if we just did the induction now.

Needless to say, I was a bit surprised. I immediately called Doc and told him that I was being admitted and that he should cancel his patients for the PM and bring his butt down to the hospital. After that, I called my mom and sister and asked them both to come to the hospital.

Next thing I know, I'm being hooked up to an IV and I'm getting my first dose of pitocin. Since they were concerned that I may have to do a c-section, they didn't allow me to eat or drink anything. Ice chips were my consolation prize and let me tell you, ice chips are a pretty sh***y consolation prize when all you've had to eat all day is a bowl of cereal.

They started me on 2 milliunits of pitocin, which didn't do much. I began to feel some contractions, but nothing to severe and then they upped it to 4 and that's when things started moving. Although reaction to dosages do differ from person to person, I guess I'm one of the lucky few who really react to the meds and at 4 milliunits my contractions were coming pretty strong and pretty close together.

This was around 6pm in the evening (my sister and mother had come by this time) and I was feeling pretty crappy. After the doctor checked me, she said that most likely I wouldn't deliver tonight because I was still not 100% effaced nor was I dilated. So, I told my sister and mother to go home and that we'd call them when there was more action.

Basically, things stayed the same for the remainder of the night with the doctors adjusting the pitocin between 3 and 4 and waiting for my body to dilate. I knew there was some progress being made because the contractions were more and more painful.

Just a quick announcement (more will be posted later): J has arrived! Weighing in at 7 lbs 15 oz and 21.5 inches, he made his impressive entrance on Thursday, March 3rd after 31 hours of labor and 3 hours of very painful, very strenuous pushing.

I apologize for the late, late posting, but I've been so incredibly busy and only just arrived back from the hospital yesterday.
Posted by Sooz at 5:08 PM 10 comments

Sooz
I am 35 and I used to like a lot of stuff, like snowboarding, running, eating sushi, and drinking adult bevs. But it seems like everything I like to do conflicts with having a baby. So, I've switched to consuming box juice drinks, eating jello, and rolling with my walker. Well, maybe not that extreme, but you get the picture. It's a different life and I guess when you're like me and are infertile and almost AMA (Advanced Maternal Age or aka an old fart), you've gotta make some life changes whether you like it or not. So, here's my journey...

November 2007: We're married! Decide to postpone family for one year to travel.

July 2009: Something is not quite right. Luteal phase is too short. Periods are too light. Start acupuncture and herbs

September 2009: Contact Ob/Gyn about short luteal phase and she refers me to an RE. The RE recommends blood work and an HSG. Husband gets a SA. Everything is clear and good to go.

November 2009: Begin Clomid Challenge Test and prepare for IUI #1 (which doesn't happen because of the Thanksgiving holiday). We end up doing things the old-fashioned way. FSH #s pass the CCT. Unfortunately, lining too thin. BFN.

December 2009: Start femara and prepare again for IUI #1. Follies look good. Lining is a little thin, but not terrible. BFN.

January 2010: Start femara and IUI #2. Start with a new acupuncturist.


July 2013 - Getting ready for trip to CC.RM and surprise pregnancy with Baby #2!