I can't believe my little man will be 6 months in just two weeks. Time has flown by in a blur and it seems like just yesterday that we had brought him back from the hospital.

It seems like everyday there's something new to discover. J now has two little pearly whites popping up from the bottom of his mouth and he's been eating solids since the 5 month mark. Our pediatrician gave us the thumbs-up on starting solids, so we cautiously started with rice cereal which he absolutely loved. Then we made our way to butternut squash (not so much love), avocado (a hit!), pears (thumbs down), and just yesterday, sweet potatoes (love at first taste).

It's also been so fun to see his little personality start to develop. He just loves being outside and around people and is always "chatting" it up. Our nanny has started to take him to the library story time once a week and she says J loves it. He watches the older kids dance and play and "talks" when the volunteer is reading. The only time he's sad is when he has to go back in the stroller. Definitely no signs of stranger anxiety.

As for my transition back to the working world, it really hasn't been too bad. I miss our little man dearly, but I know that he's in good, caring hands with our nanny (she is so awesome) and I'm actually enjoying being back at work. I've also realized that being back at work is a hell of a lot easier than being home with J all day...being a SAHM is definitely no walk in the park (although I did do a lot of walking in the park when I stayed at home, but that's a different story).

Doc and I have discussed the subject of me quitting my job and staying at home, but we probably won't do that until we move out of our current house and move into a "better" house. Not that our current home isn't good, but we decided a long time ago that we would want to move out of our house into a bigger home with a nice yard and a better neighborhood as soon as we could. It's been a slow going process, but we hope to move next year...Being in the Bay Area, the neighborhood that we're looking at is averaging about $1M for a house (for those of you outside the SF Bay Area, this actually isn't that pricey), so we've had to take our time to build up enough for a down payment and we hope that have that ready by next summer.

And, another note on moi! I have lost all the baby weight and more. Considering I have done no exercise with the exception of walking with J in his stroller, I can only credit the breastfeeding. I can actually feel myself get significantly hungrier after I nurse him. It's amazing!

I started going back to the gym last week just because I was starting to feel a bit sluggish and thought that maybe some exercise would help. Plus, I don't get to go on my daily walks with J anymore. But, I'm nowhere near the "athlete" that I used to be, not that I was that much of an athlete before I got pregnant. After more than a year of not running, it's a slow build up back.

So, that's about it for now! I'll post some pics of J next time!

Five months! I can't believe it's already been five months...There's so much to update on, I don't even know where to start.

These past couple of months have been a blur and that's partly why I've been MIA. Between sleep training (yes, we had to do this), going on a two week vacation to Hawaii, and looking for a nanny, life was just one thing after another. Hopefully, now that I'm back at work (yep, I started yesterday), I'll actually have some time to read blogs and write!

So, to begin with, Jason is now 5 months old. He's been rolling, rolling, rolling everywhere! Stomach, back, stomach, back. It's so cute, until he gets stuck or hits a wall and starts crying. And even, then it brings a smile to my face. In addition to that, he just got his first tooth! A little white tooth is starting to sprout and it's so adorable. Unfortunately, that means he's chewing the crap out of everything...His new favorite toy, Sophie the Giraffe. He gnaws the crap out of that thing.

Sleep...the holy grail! We're almost sleeping through the night. Jason now wakes up only once at around 2AM for one feed. Although, there are times when he still cries at night, he'll usually let out a whimper or a howl for all of 1-2 minutes and then go back to sleep. The sleep training was hard, but it's been so worth it. Rocking him to sleep every 2-3 hours was just not sustainable anymore...My back and wrists were hurting so much, I really couldn't function during that day, so again, the ST was difficult, but oh, so worth it.

Nanny time! I just have to say that if I were a billionaire (or even just a millionaire), I'd have a nanny 24 hours a day. It was so wonderful to have our nanny start one week early, both for the transition, so I could see her interact with Jason and for the opportunity to enjoy my last week of maternity leave. I got my haircut, a massage, ate lunch with friends, and even made it to the gym. It was amazing. Needless to say, we have a great nanny. She's wonderful with Jason and has tons of experience. So, although being at work has been difficult because I miss the little guy so, so much, it also hasn't been as bad as I thought it would be because I feel comfortable.

And, lastly, coming back to work. It's actually been pretty nice to be back. I didn't realize how much I missed work and my coworkers. Plus, I can actually get stuff done at work (like surf the net).

With that I'll leave you with a pic of Jason and his first encounter with the Pacific Ocean (our vacation to Hawaii). He was none too happy. 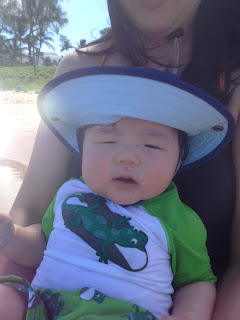 Sooz
I am 35 and I used to like a lot of stuff, like snowboarding, running, eating sushi, and drinking adult bevs. But it seems like everything I like to do conflicts with having a baby. So, I've switched to consuming box juice drinks, eating jello, and rolling with my walker. Well, maybe not that extreme, but you get the picture. It's a different life and I guess when you're like me and are infertile and almost AMA (Advanced Maternal Age or aka an old fart), you've gotta make some life changes whether you like it or not. So, here's my journey...

November 2007: We're married! Decide to postpone family for one year to travel.

July 2009: Something is not quite right. Luteal phase is too short. Periods are too light. Start acupuncture and herbs

September 2009: Contact Ob/Gyn about short luteal phase and she refers me to an RE. The RE recommends blood work and an HSG. Husband gets a SA. Everything is clear and good to go.

November 2009: Begin Clomid Challenge Test and prepare for IUI #1 (which doesn't happen because of the Thanksgiving holiday). We end up doing things the old-fashioned way. FSH #s pass the CCT. Unfortunately, lining too thin. BFN.

December 2009: Start femara and prepare again for IUI #1. Follies look good. Lining is a little thin, but not terrible. BFN.

January 2010: Start femara and IUI #2. Start with a new acupuncturist.


July 2013 - Getting ready for trip to CC.RM and surprise pregnancy with Baby #2!